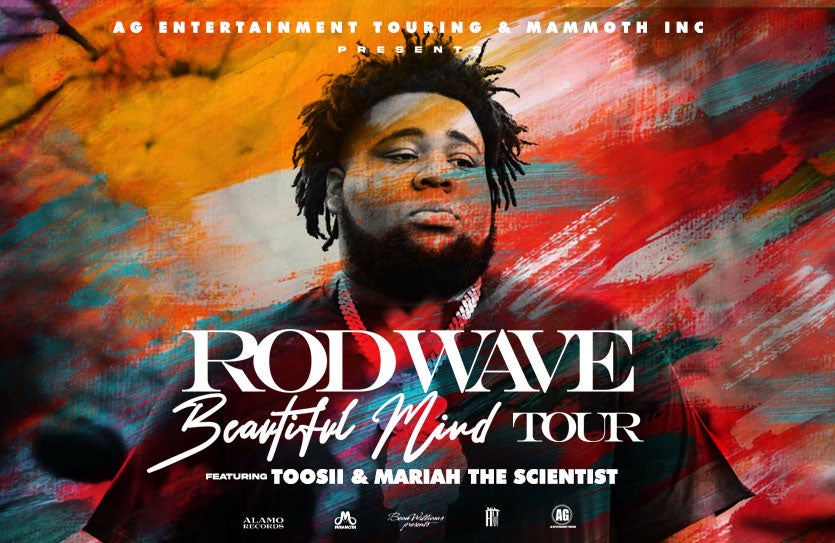 This fall, AG Entertainment Touring and Mammoth, Inc. proudly present the Rod Wave - Beautiful Mind Tour. This large-scale multi-city outing will feature Rod Wave headlining 28 of North America's top arenas coast-to-coast. The tour will kick off on November 11 at Target Center in Minneapolis, MN visiting major markets throughout the continent including Atlanta at the award-winning State Farm Arena on Dec. 1 with supporting acts Toosii and Mariah the Scientist. The full itinerary is below and on sale now. *General tickets for these dates go on sale at Ticketmaster.com on Friday, October 14 at 10:00 AM local time.

The Rod Wave - Beautiful Mind Tour celebrates his third album, Beautiful Mind, which is Rod’s second consecutive #1 on the Billboard 200 charts. The album boasts features from Jack Harlow and December Joy and has over 750M streams to-date. The album’s lead single “By Your Side” is certified platinum.

About Rod Wave
Blessed with a special singing voice, and an uncanny gift for songwriting, Florida's Rod Wave is taking his own path to the top of the game. Coming through with a soulful set of Southern sing-raps, the St. Petersburg native has built a groundswell of regional support and blossomed into a national streaming phenomenon. After releasing 3 projects in a 12 month span – Hunger Games 3, PTSD, and the platinum-certified Ghetto Gospel – Rod first erupted onto the scene with the viral 3x-platinum “Heart On Ice." His debut album, Pray 4 Love, was certified platinum within a year of release, propelled by the TikTok crossover moment "Rags2Riches." He surpassed Pray 4 Love one year later with SoulFly, which became Rod’s first-ever #1 album on the Billboard charts. After embarking on his 35-date nationwide SoulFly tour in the fall, Rod released two massive singles, the platinum-certified "By Your Side" and the Hank Williams-sampling "Cold December." The two singles set the stage for his third studio album, Beautiful Mind, which likewise debuted #1 on the Billboard charts.

From how to get here, to finding your seat, to getting something to eat and drink, click here to plan your visit to State Farm Arena.

Parking can be reserved in advance with ParkMobile.

State Farm Arena is located in the heart of downtown Atlanta, near the intersection of Marietta Street and Centennial Olympic Park Drive.

State Farm Arena is required to prohibit all bags, including briefcases, purses, luggage, and diaper bags, larger than 14" x 14" x 6" from being brought into the arena.  Backpacks and hard-sided bags of any kind are also prohibited.  Single-compartment drawstring bags and fashion backpacks or purses that are smaller than 14" x 14" x 6" are permitted.

State Farm Arena is a cashless environment. Card payment will be required at all ticket, food & beverage, and retail locations. No cash payments will be accepted.

The Atlanta Hawks & State Farm Arena maintain that the health and safety of our fans, players, partners, and staff is our top priority. We will continue to work closely with local and state health officials, infectious disease specialists, and the NBA for best practices to avoid the spread of COVID-19. To learn more about our protocols, click here.

*Information on this page is subject to change in accordance with the CDC and local health officials.

State Farm Arena does not permit the following items into the arena:

Staying at the Omni Hotel?

To access the Omni Hotel’s North and South towers, exit through Gate 7 and walk west on Andrew Young International Blvd NW towards Marietta St NW. The Omni Hotel will be on your left.